has literally no idea where the hotel is…A nap was in order, followed by a trip to the completely touristy but pretty awesome Donghuamen Night Market

and Wangfujing Snack Street. One of the guys proved himself to be a complete weakling, only forcing down one mouthful of snake. I mean honestly, the deep fried locust really wasn’t that bad.

The next day we decided to head towards Tienanmen Square and the Forbidden City. Important note tourists – you need your passport to buy a ticket to the Forbidden City, so we retreated to Beijing Zoo to laugh at lazy pandas

and feel sorry for a far too hot polar bear. At this point my foot decides to go a bit insane, and stays that way until well after I return to the UK. But I soldier on, barely mentioning it more than once or twice an hour, because that is the kind of hero that I am. I could have done without a trip to the Birds Nest stadium at this point, but to be fair, stadium and beer are kind of a pre-requisite to travelling with guys. That night we ate at a small place at the end of the street, over-ordering as always, but gorging on all things deliciously Pekinese.

The following day we went to the Alley Cafe (completely recommend, has kittens wandering about) for breakfast then headed to the Juyongguan Pass, through which the Great Wall of China well, passes. You can’t go to Beijing and not go to the Great Wall, and it was interesting, however knowing it was rebuilt in the 1960’s took something of the magic away. That and the unending Beijing smog, which 50km away was still just a delightfully thick.

When we got back to Beijing, we headed first towards Jingshan Park, then through the outskirts of the hutong backstreet’s to Beihai Park. For me, this was my favourite part of Beijing – Jingshan was a beautiful quiet area, rising up in an artificial hill to overlook the Forbidden City, whilst a boat ride amongst the giant lilies in Beihai was captivating and exhilarating. And to round of the day, a trip to Siji Minfu for Peking Duck. I can’t even put it into words how gorgeous that duck was, along with all of the other food we over-ordered (again). We picked up two lovely Finnish ladies with the allure of free dumplings, and over a beer on Wangfujing Street they told us about their adventures on the Trans-Siberian Railway.

And so, with one day to go, we managed to get into the Forbidden City. This was a bucket list tick – I haven’t seen anything like it, a monument to the wealth and the organisation of Imperial China. It represents a culture that flourished in art, philosophy and trade

, at the time when most of Europe was hulking around in the dirt slaughtering each other or dying of the plague. After wandering the many courtyards, each a clever reflection but in turn different, we finally exited and made our way back round to to Tienanmen Square to watch the lowering of the Chinese flag. Beijing was at an end; the next morning we would cough goodbye to the incessantly grey, pollution filled skies and head back to Shenzhen for a ferry ride to Macau.

Yep, that it a stadium. Sporting events have definitely occurred here. 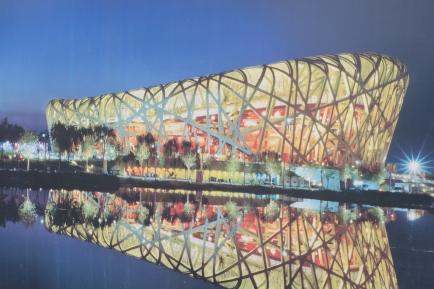 That is a picture of a stadium at night.

Bridge at the Juyong Pass 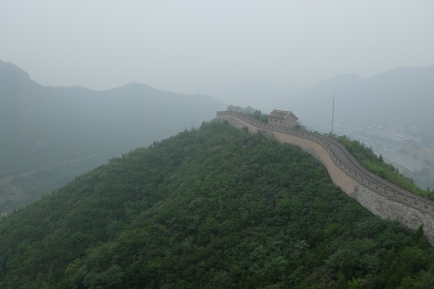 Great Wall stretching into the mountains

A bit we didn’t climb. 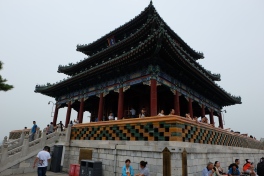 Jingshan Park Temple on the Peak

Birds in the lilies at Beihai Park

View to Bridge at Beihai Park 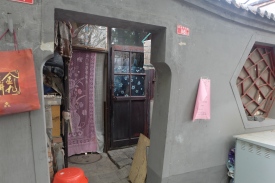 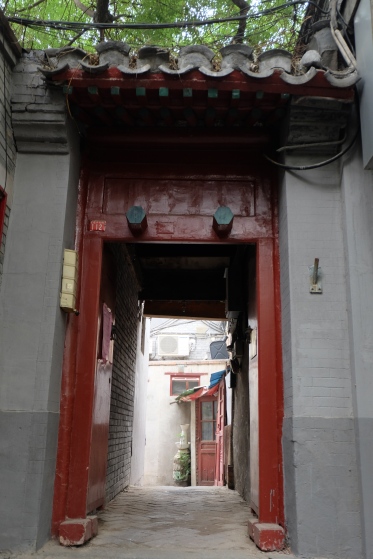 One of the temple rooms

A ceiling not yet restored

Bronze statue near the North gate 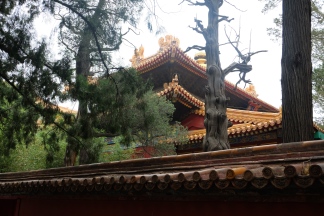 Looking back from the North Gate