Utilising the new rule that bringing an item that was ‘on the shelf’ into proper use count towards the total, I am inching my way towards 100 items. And today I finally framed and hung my mandala, purchased in Nepal in 2014. Nepal was a bit of a horror show in terms of travelling; I’ve never really had any issues on any trip before, but in the space of 2 weeks I got:

I truly don’t understand how my close friend, who had to try and sleep through my incessant coughing for 7 nights, didn’t push me off a mountainous ledger. Because throughout all of the second week, I had to actually exert myself as well, trekking in the foothills of the Himalayas.

BUT thank god for that trek. As the first week had been a build with Action Aid in the flat border lands near India. It was hard work, and hard living, and combined with the illness I can’t honestly say I massively enjoyed it. Unlike Cambodia the previous year, I also wondered as to the effectiveness of our intervention; we were supporting a section of Nepalese population who had recently been freed from indentured servitude. Whilst building them secure housing was great, the problem was spelt out to me by the local guide – the plots given to the people were too small to do anything above subsistence farming, and Nepal, like India, continues to run a caste system. So whilst the people were now free, which was excellent, the chance of improving their lives and the lives of their family was severely impeded by the society they lived in. And no amount of foreign aid can really resolve that.

Anyway, by the time we got back to Kathmandu at the end of the 1st week I was pretty ready to leave Nepal. But, after some amazing sights in Kathmandu (and the purchase of said mandala picture), we arrived in the Himalayas and everything got a bit better. Sure, I still felt sick, couldn’t breathe through my nose, coughed every 5 seconds, and hadn’t eaten anything, but even the foothills of those mountains are worth all that and more.

And honestly, I have to go back and see more. And that is why the mandala is so important to get up; to remind me that you can be horribly ill, have to live in a tent and shower under a bucket, lose your passport and $200, but that some things are so spectacular, so incredible, that they will blow that all away and in the end, you’ll only really remember the good times.

The best bit of the Mandala! 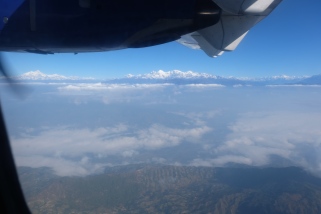 The Himalayas from the plane 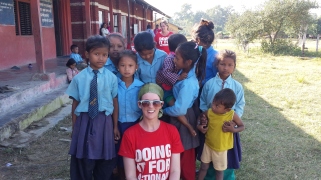 Me and the kids in the village. I’m the pasty one at the front in case that isn’t obvious 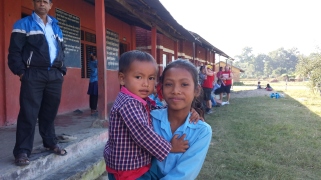 The kids in the village were just beautiful and so cute

Old houses and barn in the village we worked in.

And old, derelict mud house, its brick replacement is in the shadows on the left 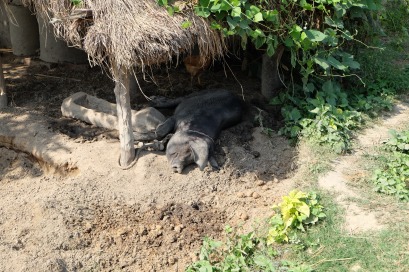 A pig in the village chillin’ like a villain

A panorama on the road at the edge of the village

Foggy morning over the fields in the village we worked in

The view of Kathmandu over Boudhanath Stupa 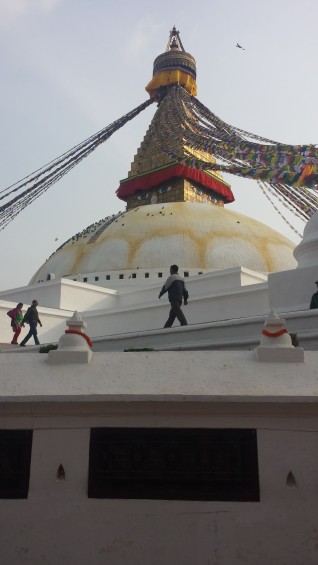 Men walking on the edge of Boudhanath Stupa

The home of the Mandala at Boudhanath Stupa

Shrine at the Monkey Temple

A monkey at the Monkey Temple, eating a banana that had been thrown at my friend by an over-enthusiastic Hari Krishna. You couldn’t make it up. 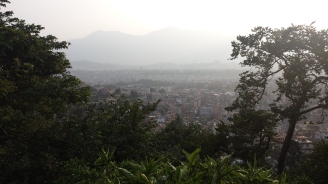 View of Kathmandu from Monkey Temple

Our guides, whose names I have shamefully forgotten.

Prayer flag covered bridge at the start of the trek

River at the base of the valley – before we started climbing

Getting a bit higher! 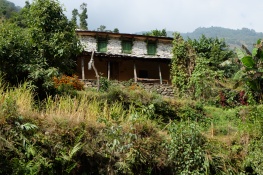 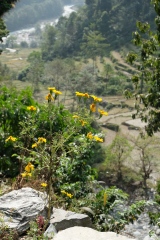 Flowers and rice paddies, river getting further away!

LOOK AT THIS PLACE! The only ‘roads’ are the steps cut into the mountains. 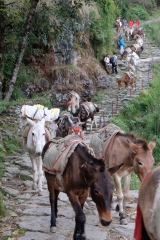 And the main transport, apart from people, are mules. These are happy unloaded mules going down a mountain.

6am on day 3, and worth being awake to see Machapuchare (Fishtail)

View from Pothana of one of the Annapurna’s

View from Pothana of I think Annapurna South

View from Pothana of an Annapurna and Machapuchare

THe final view down the valley before the end

** This cold thing re-occurred (I’m not even kidding) for 5 months. I seriously thought I had either – early onset menopause,  TB (despite being vaccinated) or some kind of cancer. For 2 months I woke up drenched in sweat each night, like wet through t-shirt. The cough came back 4 separate times, and it didn’t truly do away until I took 2 week off work for a ‘holiday’, and which I spent 1.5 weeks lying on the sofa feeling pitiful. So hopefully when the next plague strikes, I’ve already had a mild version of it, because that’s what it felt like.