Whoop whoop whoop the living room is 95% done! And I have started on the back bedroom, which ended up with me getting rid of bit from the front bedroom to empty the two drawers under the bed… and that’s about it. Since the back bedroom is my Everest, I’m viewing this as an acclimatization period; you climb a bit, then rest, maybe go back down a bit, rest again, then maybe climb a bit again… don’t judge me!

Removed From My Life

So nobody stole the remaining metal pots from outside the garden, which was damn inconsiderate of them! So they had to go on a special trip to the tip, but hey, I love a random tip trip. I also managed to bin off a lot of old electricals (broken electronic toothbrush, its charger, an energy saver unit which was more trouble than it was worth) and another random metal tray liberated from the garden.

There was a sad and unexpected loss in the form of my 12 year old Thailand flop flops (70 baht in 2004, clearly the most cost effective item in my wardrobe by some measure). The right flip flop suddenly died outside the supermarket some 10 minutes walk from my house. And let me tell you this… it is impossible to walk in a broken flip flop. Luckily there are a lot of random characters in Acton, so a girl walking with one bare foot holding a broken flip flop wasn’t to unusual.

Everything else pretty much came from my ‘exercise’ drawer (a chronically underutilised area of the overall wardrobe) or bits that I had clocked I wasn’t going to wear. Managed to recycle most, but had to bin the bikinis because frankly ew. The bikinis were an interesting one actually… I realised I had 3 sets, plus 3 swimming costumes. Which seemed a bit unnecessary since I don’t really go in the sun (PALE AF). And I knew these two didn’t actually fit, so why was I keeping them. Because hoarding. That’s why. 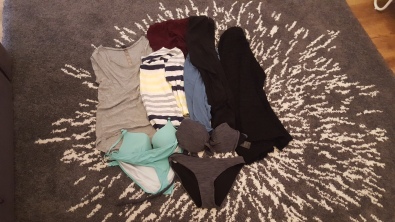 All da clothes and things

Random. Have a new home at the tip. Be recycled into something cool.

Why weren’t you just stolen!!

More baby steps; used up a packet of probiotics and vitamins, not replaced. Also a face serum thingy which cost like £15 a did actually fuck all. It may even have made my skin slightly worse. Grrr. Not much else .

Why Evolution Is True
Are we there yet?