I went on a bicycle journey to the Barbican; I got very excited about some Japanese architecture.

I bloody love Japanese architecture, especially housing. One of my more ridiculous Pinterest boards is mainly filled with tiny Japanese houses, which <rant beginning> would never be allowed to be built in UK cities because our planning laws are stupidly restrictive because everything, no matter how shit, has to be preserved <rant over>.

When I found out that The Barbican, an early 80’s brutalist-style arts and housing complex in the City of London, was hosting an exhibition on Japanese architecture I was there. And it was brilliant! I wanted to cycle down to see a bit more of the city as I normally go from the suburbs in the West of the city to Oxford Street, and then stop. The City of London, which is very small and very old, is definitely worth a visit – it is packed with modern skyscrapers and ancient sites like the Tower of London, The Guildhall and of course, St Paul’s Cathedral. And I feel like I saw quite a lot of them, whilst I aimlessly cycled around getting lost; it is categorically not the part of the city with straight, easily navigable roads!

By the time I made it to The Barbican the day was gorgeous, the first really sunny day of the year. Inside the Barbican, it was all dark colours and concrete, which was offset against the blazing sunlight coming in through the windows overlooking a slightly grim public space. The architecture of the site itself is really interesting and I think works aesthetically, even if it is extremely pared back, but I can’t really get on board with outdoor spaces that are just concrete – they remind me too much of The Clockwork Orange…

The exhibition itself was awesome; they had a full reconstruction of the Moriyama House in Tokyo in the centre, which you visited after a full tour showing the history and development of Japanese housing post 1945. I learned a huge amount, especially about the changes from enclosure and encasement from the city, to the newer waves of openness. One thing I didn’t realise was the concept of redundancy in housing; instead of preserving and redeveloping, houses are largely designed to be pulled down every 20-30 years and replaced. I tried to take a few photo’s, but to be honest I was a bit excited and kind of forgot about it!

A great day out and definitely somewhere I will try and go to again. 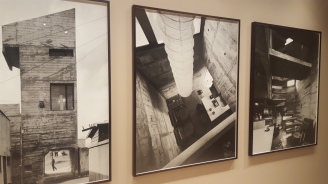 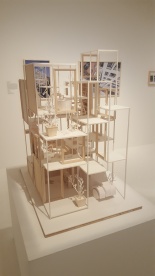 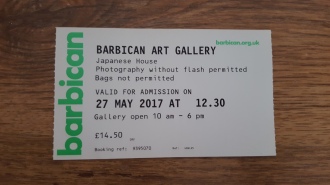